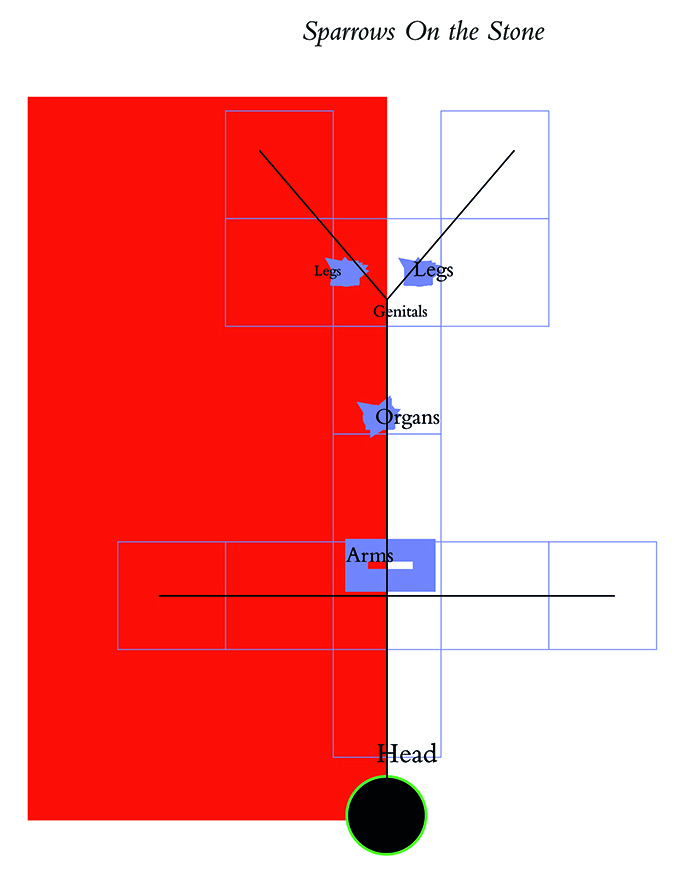 – Anne Carson, excerpt from Short Talk: On Major and Minor, 1992

The line is a primary element, like a letter, a black graphic sign on a white page. A stick figure is a diagrammatic drawing representing a human or animal, usually made with one line each for the torso and appendages, and often a circle for the head. Sparrows On the Stone maps freestanding walls into the configuration of a body, each surface a proxy surrogate for arms, legs, stomach, entrails and genitals. Hung cables and conduits interconnect these walls, the whole system forming an economical diagram of a stick figure, the singularity of one body-form extending at gigantic scale across the full spread of the gallery. A mirrored shadow figure is projected downwards and joined with further cables on the floor.

Using the ancient philosophical metaphor of “the body politic”, the exhibition morphs the allegory of a single individual body into a raging grammatical city, a contemporary projection of systems, agency and the digestion of ideas. The body swallows the world and is itself swallowed by the world. Each wall’s surface holds a visual morphology of a discontented identity, the growing tantrum of a rebellious citizen: there is the body of the people, the crowd, the street, the marketplace. The body of the clown, the child, the lover, the “law”. The drunken body, the wild body, the sick body, the carnal body, the despised body. The body that jostles for space, for knowledge, for acceptance, for sleep, for water. The unique tactile difference of each piece is made significant: the brain fears an audience, itself, its nervous mystery; the mouth speaks, it consumes, moistens, self-loathes, loves; the arms push and shove, they hold fragments, tie shoes, hold children close; the belly negotiates, it hungers and moans, feels drunk, boiling, solitary, alive; the legs chase and tremble, mark geography, tread water and perhaps the toe, too, thinks and proliferates; the anus spits it all out.

Through paintings and sculptural parts, the word T E M P E R is mapped out in numerous subtle repetitions: in the literal composition of structures which form a striking resemblance to letters, and once again in the spelling of the word, dissected over a much extended area on the gallery’s final wall: TE / MP / ER. The exhibition offers a shoddy mathematics: 6 walls each make vertical 2 active sides to house a painting, meaning 12 individual faces; the word temper is composed of 6 letters; a tantrum, then – temper temper – is another repetition of these 12 letter forms, meaning that each wall, each painting, each constituent part is a piece of the larger whole. And in that, the labouring visual body is forced to draw together, only to break itself apart. Its physical presence is both choked and clarified by the impression of a body’s language: a palette of reflection and denial, a metaphor, a trope of fragmentation with all its absurdity and trembling poetics.

Just as birds scatter and reform on the mortar of our cities, Sparrows On the Stone – S.O.S – is both a map and invention of slippage: our scabs, our shreds, our exuberance and our stink.

There are 12 paintings, 2 floor-based sculptures and 14 works on paper.