This September, Georgia Gardner Gray presents NDE, an exhibition of new works, spanning painting, sculpture and theatre – marking her first solo presentation in the UK. Referring to the phenomenon of a ‘Near Death Experience’, her tableau recalibrates the simulacra of modernity alongside supernatural elements, to evoke a shifting paradigm away from fetishized objects and disembodied moods – to immanent rapture. The body of work centres on an exploration of the everyday incidents, labours and archetypes that constitute life now; pursuing an open-ended narrative composed by ubiquitous consumer products, stock imagery, somatic and psychological states, marked by brief memetic punchlines. Through these scenographies Gardner Gray attempts to probe our system of belief, staging pert encounters with the binary symbols that we read: seedy, respectable, educated, uneducated, subversive, conformist, real, imaginary, etc. She reveals the pervasive social maps for passing temporal judgement.

The eponymously titled play NDE (Near Death Experience) opens with the near death of a wounded soldier in an unspecified future World War. He finds himself in an out-of-body experience, travelling through scenes of his brief life. Puncturing the rhapsodic, the highfalutin themes are folded between the petty microaggressions of everyday modern life.

The first performance of NDE will take place during the opening, on Thursday 08 September, at 7pm, with further performances at the gallery during Frieze Week 2022: 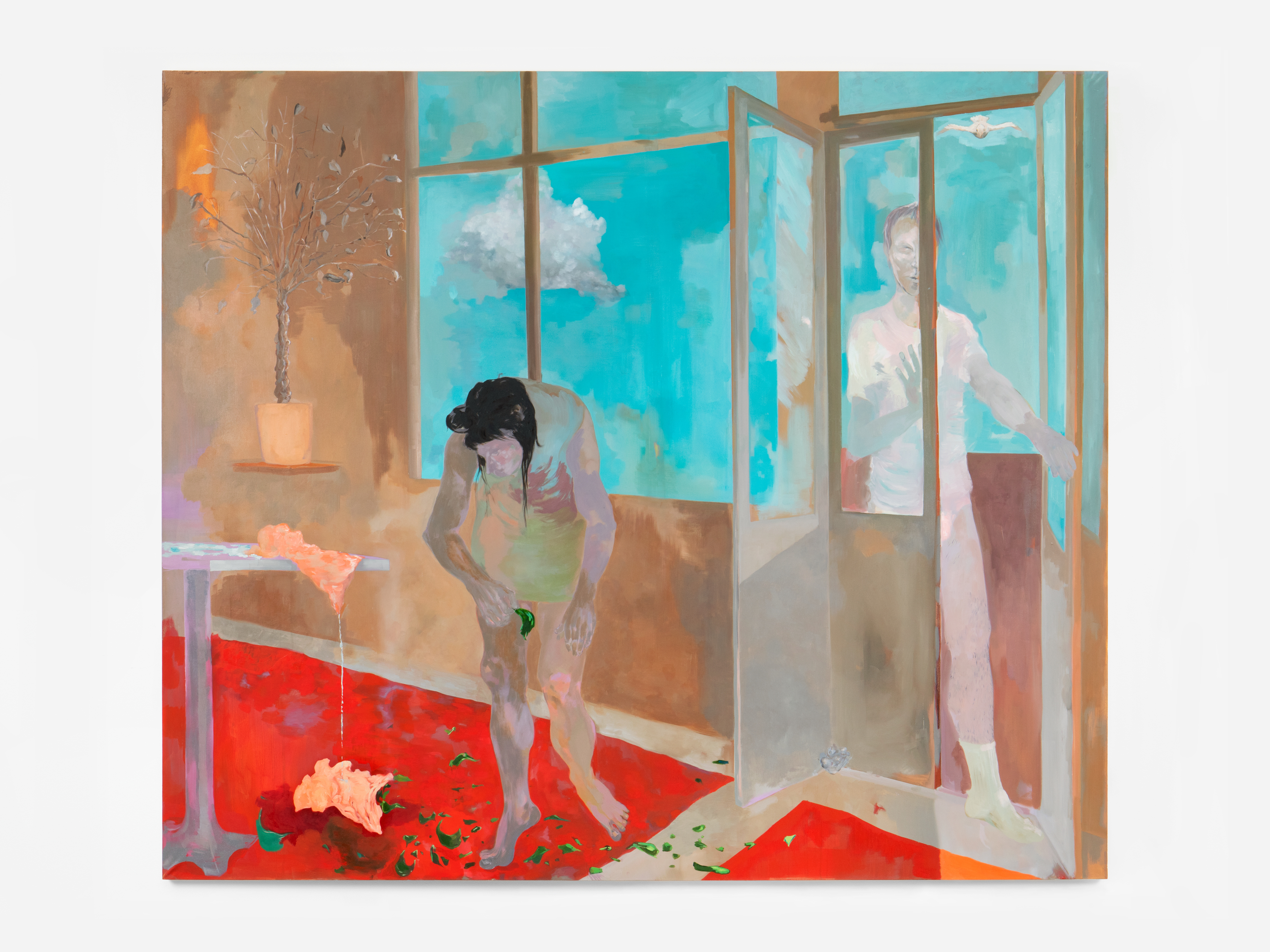 On the Threadbare Carpet, Worn constantly thinner
By perpetual Leaping
This Carpet that is lost in infinite space
Stuck on like a bandage as if the suburban sky had wounded the earth.
Around this pestle pounding the carpet
This pistil fertilized by the pollen of it’s own dust
Producing in turn the specious fruit of displeasure
The unconscious gaping faces
Their thin surfaces glossy with boredom’s specious half-smile.

Angel!: If there were a place that we didn’t know of, and there
On some unsayable carpet, lovers displayed
What they could never bring to mastery here–the bold
Exploits of their high-flying hearts,
Their towers of pleasure
Their Ladders
That Have long since been standing where there was no ground, leaning
Just on each other, trembling, – and could master all this,
Before the surrounding spectators, the innumerable
Soundless dead:
Would these, then throw down their final, forever
Saved-up
Forever hidden, unknown to us, eternally valid
Coins of happiness before the at last
Genuinely smiling pair on the
Gratified carpet?

– From The Fifth Elegy, The Duino Elegies, Rainer Maria Rilke

Georgia Gardner Gray (b. 1988, New York NY) graduated with a BFA Cooper Union for the Science and Art, New York, in 2011. She has had solo exhibitions at institutions including Kunsthalle Lingen, Lingen (2018); UKS/Kunstnernes Hus, Oslo (2017); and Kunstverein Hamburg, Hamburg (2017). In addition, she has also participated in group shows including those at Sadie Coles HQ, London (2021); Kunsthalle, Bern (2021); Tallinn Art Hall, Tallinn (2019). She has staged performances with the Volksbuehne, Berlin; (2018) and with Schinkel Pavillon, Berlin (2019). In 2018 Gardner Gray was awarded the Lingen Art Prize, dedicated to emerging artists who work in the medium of painting. She lives and works in Berlin.